The suffragists had readied themselves for defeat as they anxiously counted the roses that symbolized their personal and political fate.

The all-male Tennessee legislature was about to decide whether to ratify the 19th Amendment to the U.S. Constitution, a change that would grant women the right to vote — and a moment the suffragists in the statehouse gallery on Aug. 18, 1920, had been working toward for weeks.

Many of the men below them wore roses on their lapels, declaring the choice they planned to make. A yellow rose meant a promise to ratify. A red rose represented a death knell for equality.

Of the 96 lawmakers who had gathered, half were wearing red or opposed suffrage. The state Senate had already approved the amendment, but a tie in the House meant defeat.

They could win only if an opponent changed his mind.

For seven decades, American women had been fighting to secure suffrage, a campaign that challenged the White House and targeted Congress until federal lawmakers finally passed the 19th Amendment in June 1919. But more than a year later, the amendment had yet to become law. It needed the backing of three-fourths of U.S. states, and by the summer of 1920 only 35 of the country’s legislatures had agreed to ratify.

Tennessee, with its divided allegiances, had a chance to become the “Perfect 36th.”

But antisuffragists had delivered racist and sexist speeches against the 19th Amendment, and earlier that day Tennessee House members had voted twice to table the ratification decision. Both times, they had tied — 48 to 48.

The men had no choice but to vote on the amendment. 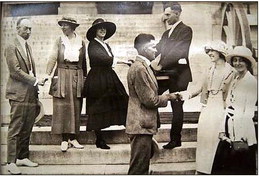 “No,” declared the next four.

What followed became one of the defining moments of the women’s suffrage movement, shaping the lives of American women for the next 100 years and changing the history of one family from Niota, Tenn.

The roll call had landed on Harry T. Burn, at 24 the youngest state lawmaker. He had voted twice to table the amendment. On his lapel was a red rose.

But beneath the rose, in the pocket of his suit jacket, was a letter delivered that morning from his mother, Febb Burn. Between updates on the farm and the family, she had slipped in three references to the vote.

“Hurrah and vote for suffrage,” she told her son, “and don’t keep them in doubt.”

And Burn knew what he had to do.

“Aye,” he said, and he pulled off his red rose.

••• It was the hateful speech of her son’s political mentor that put Febb over the edge, according to research her great-greatgrandson did for his new book, Tennessee Statesman Harry T. Burn: Woman Suffrage, Free Elections & a Life of Service.

Febb was a college-educated widow who read three newspapers a day and felt strongly that her mind was the equal of any man’s. She and her son had talked about the importance of suffrage before he headed to Nashville in early August 1920 for the legislature’s special session. Suffragists had even consulted with Harry and placed him on their “aye” list. But Harry was also up for reelection in a contentious race. Back home, his loudest constituents had made themselves clear: They did not support the 19th Amendment.

The pressure campaign began as soon as he arrived in the state capital. As many as 150 lobbyists descended upon Nashville, and backdoor meetings flowed with bootleg whiskey and bribery rumors.

The Republican and Democratic presidential candidates and the chairman of the Republican National Committee called and wired Burn, urging him to vote for suffrage. But back home in McMinn County, residents held a mass meeting at the courthouse and passed a resolution demanding Burn vote no.

No one was as vocally opposed as Burn’s mentor — state Sen. Herschel M. Candler.

In a blistering speech just before the state Senate voted on ratification, Candler denounced the suffragists as low-class and childless, trying to “put something over on the good women of Tennessee.”

“This is the kind of woman who is trying to dictate to us,” Candler said. “They would drag the womanhood of Tennessee down.”

Catt did not defend her Black suffrage sisters after Candler’s comments, but instead denied his claim and called interracial marriage an “absolute crime against nature.”

Back in Niota, Febb balked at Candler’s racist address. Her son, she noticed, had not yet declared his support for suffrage. On the porch at Hathburn, the Burn family homestead, she began to write.

On page two: “Hurrah, and vote for suffrage, and don’t keep them in doubt. I noticed (Candler’s) speech, it was very bitter.”

On page four, referring to reelection: “I hope you see enough of politicians to know it is not one of the greatest things to be one. What say ye??”

And on page six: “Don’t forget to be a good boy and help Mrs. ‘Thomas Catt’ with her ‘rats.’ Is she the one that put rat in ratification? Ha! No more from Mama this time. With lots of love.”

A century later, the Burn family descendants each see this story through a different lens — and many of them have only learned of the depth of Harry and Febb’s legacy in the last few years.

For Tyler Boyd, a 33-year-old teacher and Febb’s great-greatgrandson, it only made sense to unearth his family’s history in time for the suffrage centennial. He had learned in school about Harry’s vote and Febb’s famous letter. When he teaches government class, he takes extra time to talk to his students about that day in history.

But he decided to write his book after Harry’s only son died of cancer in 2016, and he learned weeks later at Niota’s Fried Green Tomato Festival that women in the state were petitioning for a Febb Burn state holiday and statue in nearby Knoxville.

“We are the next generation,” Boyd said he thought as he watched as the women who supported Hillary Clinton in her unsuccessful quest for the presidency placed their “I voted” stickers on the gravestone of Susan B. Anthony. “We need to step up and do something to honor this legacy.”

His research led him to the small public libraries of McMinn County, to newspaper microfilm archives across the state and to Harry’s personal papers at the McClung Collection in Knoxville, where he held Febb’s famous letter in his hands.

For Febb’s great-granddaugh-ters, her tone in that famous letter is one of the things they’ve come to appreciate most, said Sandra Boyd and Cathy Allen.

“She didn’t demand,” said Sandra Boyd, Tyler’s mother. “She just slipped it in there, and it worked.”

Febb died before they were born, and their father didn’t talk much about her. He was “all business” as the operator of the Crescent Sock Co., another Burn family legacy. Co-founded by Febb’s husband in 1902, Crescent is one of the oldest family-owned hosiery mills in the nation. Today, in its fourth generation, the mill is woman-owned and operated — with Sandra Boyd and Allen at the helm.

Febb’s vintage couch now sits in Crescent’s lobby, where customers and visitors take pictures, including Republican Sen. Marsha Blackburn, the first woman elected to the U.S. Senate from Tennessee. The sisters are shepherding the business through the pandemic — the greatest financial and public health crisis in about a century — like their male predecessors did during the Great Depression. They just launched a new sock line, Febb’s Boutique, with female empowerment quotes stitched on the feet.

They know their late father was proud of them. “But he had this mind-set that women can’t run a business,” Sandra Boyd said. “And I hope he is looking down and saying, ‘Maybe I was wrong.’”

••• The blowback from Burn’s vote was immediate.

It broke the tie. The speaker of the House promptly moved to change his vote from no to aye, a scheme to try to repeal the vote a few days later. But instead, it gave the body a constitutional majority — formally ratifying the 19th Amendment.

Tennessee had become the “Perfect 36th.”

To protect Burn, the governor ordered the sergeant-atarms to be his guard, which the young lawmaker found annoying, according to Tyler Boyd’s book. He slipped from the chamber, climbed out a window, shinnied across a thin ledge and briefly sought refuge in the attic of the state library.

The day after the vote, facing accusations of bribery and wrongdoing, Burn had a statement read on the House floor.

“I believe in full suffrage as a right,” he wrote. “I believe we had a legal and moral right to ratify; I know that a mother’s advice is always safest for her boy to follow, and my mother wanted me to vote for ratification.”

Back in Niota, the wife of a former Louisiana governor appeared at Hathburn uninvited. She lectured Febb for four hours, trying and failing to persuade her to get her son to change his vote.

“I am glad that he loved me enough to say afterward that my letter had so much influence on him,” Febb told the Nashville Tennessean.

“Some of my neighbors, I understand, have said they are sorry for me,” Febb said. “I don’t need any sympathy. I am proud of my son. He has covered himself with glory.”

Burn would go on to win reelection, a validation of the aye vote that defined the beginning of a long career in public service — one in which he fought to eliminate the poll tax, increase polling stations and lower the voting age to 18.

But later in his life, he also worked alongside Republican activist Phyllis Schlafly to stop the ratification of the Equal Rights Amendment — the next battle the suffragists took on, one that still is being waged today. His reasoning echoed some arguments of those who had opposed suffrage 50 years earlier.

At a Stop ERA event in 1974, Burn said the amendment would be an “unnecessary appendage to the U.S. Constitution” that would lead to “a great loss of rights for women.”

Yet until his death in 1977, Burn treasured his mother’s letter. It was donated to a museum alongside the rest of his personal papers, which included another cherished document that McMinn County did not update before 900 women registered to vote in October 1920. Febb was first in line. 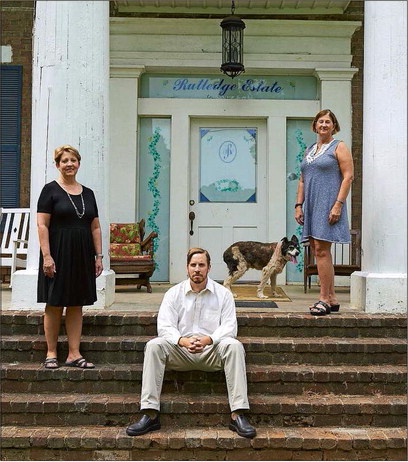