TAMPA — A collision between a wrong-way driver and a tractor- trailer carrying apple cider resulted in a fiery crash that closed lanes of Interstate 275 for hours early Monday morning.

The crash happened about 3:15 a.m. near Bearss Avenue as a 25-year-old Lutz man was driving a car northbound in the center southbound lane of I-275, Florida Highway Patrol troopers said. As the car approached a southbound semitrailer, both drivers swerved to try to avoid a crash but collided nearly head-on.

The semi struck the concrete center median barrier and caught fire. The car rotated and came to rest on the outside shoulder.

Hillsborough County Fire Rescue crews extricated the driver from the car. Paramedics took him to the hospital with serious injuries and firefighters extinguished the truck fire.

Troopers initially closed the interstate in both directions. The northbound lanes reopened about 5:30 a.m.

The southbound lanes remained closed through rush hour, snarling traffic for miles. A traffic camera image showed crews using a crane to remove the semi trailer from the scene.

The Florida Highway Patrol reopened the southbound lanes about 9:50 a.m., more than six hours after the crash.

The Highway Patrol did not release the name of either driver. The agency no longer releases names in its news releases, citing its interpretation of Marsy’s Law, a constitutional amendment passed by voters in 2018. The law is meant to protect crime victims, but it deprives the public of information that had long been made available in Florida under the state’s public records law. 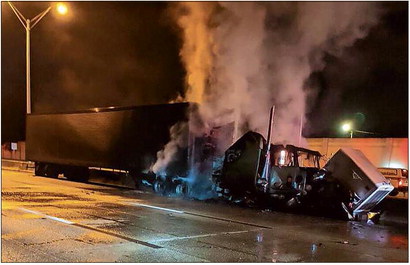