CLEARWATER — When Nicholas Capogna rolled through a stop sign in a residential neighborhood south of downtown in December 2017, causing another driver to slam into his unmarked Chevrolet Caprice, it wasn’t the first time the Clearwater police officer had damaged a car on the job. It wasn’t the second either.

It was at least the fifth time, according to personnel records. And that doesn’t include a 2014 off-the-job incident in which Capogna was suspended after two of his colleagues pulled him over on suspicion of drunken driving.

Now, the 2017 crash is the subject of a lawsuit filed last month against the city, as the other driver says the collision left her with long-lasting, expensive injuries.

It was already dark, just after 7 p.m. that December evening, as Capogna drove north on South Prospect Avenue, according to an incident report. He was trailing another vehicle, he told investigators, when he approached the street’s intersection with Druid Road. It was a two-way stop, with stop signs on South Prospect and right-of-way for drivers on Druid.

Trying to catch up to the vehicle he was following, he rolled through the stop sign at 15 mph, according to the report. At the same time, Emine Redzepi was driving east in her Toyota RAV4, going somewhere between 35 and 45 mph. Capogna drove into her path, and Redzepi slammed into the front of his car.

Redzepi went to a nearby hospital with pain in her neck, back and arm, though it wasn’t immediately clear how serious her injuries were, according to the report. The crash caused $10,000

worth of damage to Capogna’s department-issued car and $5,000 in damage to Redzepi’s Toyota. Capogna wasn’t hurt.

An investigator determined that Capogna could have prevented the crash. A month later, the department’s office of professional standards ordered written counseling and remedial driving training for Capogna. But he didn’t lose the privilege of taking his police cruiser home with him, nor did he receive a letter of reprimand.

Court records show no evidence of a traffic citation, either: Capogna has never been cited for any of his on-the-job collisions. A spokesman for the Clearwater Police Department said it goes against department policy to issue citations to officers for on-the-job traffic violations, and that discipline is handled internally, with no public court record created.

“We have an internal discipline process held by our Command Staff,” Lt. Michael Ogliaruso said in an email. “There would not be a court record/citation.”

St. Petersburg lawyer Jennifer Beltz, who represents Redzepi, said she didn’t have her client’s permission to discuss the details of her injuries. Through her lawyers, Redzepi declined to comment for this article.

“We look forward to fleshing out more of these issues in the discovery process and look forward to cooperation from the attorneys representing the police department,” Beltz said.

A few years earlier, in March 2012, Capogna damaged a police cruiser, according to an internal affairs report included in the lawsuit. That happened again in April 2013, and again in October 2013.

Most details of those incidents weren’t immediately available, but summaries showed that he was first ordered to counseling and remedial training, then given an “employee notice,” then finally handed a one-day suspension. In every case, investigators found the damage was preventable. Capogna’s disciplinary summary, which dates to February 2013, does not reflect the March 2012 or April 2013 incidents.

Then in March 2015, Capogna was driving a police cruiser behind another officer on Cleveland Street in downtown Clearwater, according to an incident report by Clearwater police and an internal affairs investigative report. The officer in front stopped to let pedestrians cross, but Capogna was distracted, according to the investigative report: He was focused on the Pandora online radio station playing on the computer in his car.

By the time Capogna looked up from the computer, it was too late to hit the brakes. Nobody was seriously hurt, but both cars were damaged and both officers had minor injuries. The police department determined Capogna was at fault; he was suspended for five days and had his take-home car privileges revoked, the Times reported in 2015.

In addition to not being ticketed for any of those incidents, Capogna also never faced charges in an off-the-job incident that drew some public attention in 2014. On Jan. 23 of that year, Clearwater police got early morning calls from multiple people who said they saw a man stumble out of a beach bar, get in his car and go swerving down Clearwater Memorial Causeway. One caller said the man could barely walk.

Two Clearwater police sergeants stopped the car in question moments later. Capogna, a colleague of theirs, was at the wheel. He smelled of alcohol, and the sergeants could tell he’d been drinking, according to internal affairs reports cited by the Times in an article a few months after the incident. Three other officers responded to the traffic stop, too, but nobody conducted a field sobriety test, and one of the sergeants drove Capogna home.

None of the other officers reported Capogna to the department, which only learned of the incident after a witness commented on its Facebook page. Both of the sergeants were reprimanded but not suspended, while Capogna was suspended for five days and had his takehome patrol car taken away for a year.

Capogna’s disciplinary history shows he’s been the subject of at least 15 other internal inquiries or investigations since 2013. Five of those were determined to be unfounded or didn’t reach a conclusion, and a September 2017 vehicle accident was found to be non-preventable. The others, which Capogna typically received counseling for, involved discourtesy, “duty to read/understand/ comply” or sleeping on the job.

Capogna, 35, joined the department in 2008, the Times previously reported. Before that, he graduated from Clearwater Central Catholic High School and attended the University of South Florida, where he was a starting offensive lineman for the Bulls football team, according to the university’s athletics website. His family owns Capogna’s Dugout, a Clearwater Italian restaurant and sports bar his grandfather opened in 1973. 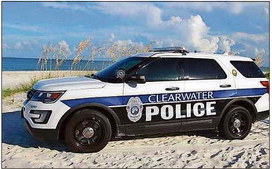